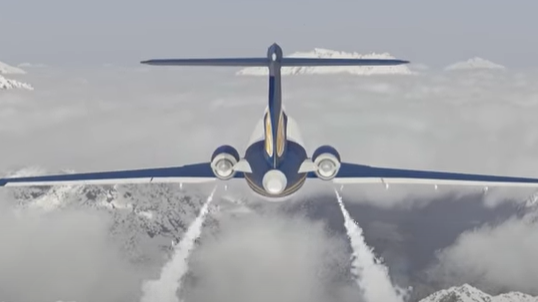 Are you a rich coke-fueled 1980s millionaire? Do you want to rub shoulders with Hollywood celebrities and fly the world’s most luxurious airline? With ticket prices starting from a mere $3,200 from Los Angeles to New York one way, you too might be able to get one of the 33 seats onboard MGM Grand Air!

The US 1980s market deregulation was a fascinating time. The ticket prices were totally unbundled, the industry in north America saw an explosion of carriers catering to many different niches, such as wacky low-cost operations like People’s express, less-than-presidential shuttle service and even one that was smoker focused, as in every passenger got a free pack of cigarettes to enjoy onboard.

But no other airline is as strange as MGM Grand Air, an airline run by a casino that tried to combine trans-continental service and the private jet experience – and ultimately, was a colossal failure. This is the MGM Grand Air story.

Our story begins with MGM owner at the time, Kirk Kerkorian. Kirk had plenty of experience operating aircraft, having flown them in the war, and had made a small fortune afterwards by selling old military aircraft in the early 1950s. His success led him to run his own charter airline called Trans International Airlines that focused on the very lucrative destination Las Vegas trade, ferrying high rollers to the desert jewel. He quickly realised that while his tickets were expensive, it was nothing compared to what these gamblers were willing to spend at the tables, and thus by the 1960s, he sold the charter airline, rolled out his own Casino and would buy the famous Metro-Goldwyn-Mayer movie studio by 1969. He would combine the two enterprises into the world’s largest hotel with over 2,000 rooms.

However, our Kirk returned to the aviation world only a few years later with a plan to create a luxury commuter carrier, bringing the experience of the MGM resort to the air!

Kirk’s plan was as follows. The airline would operate between New York’s JFK Airport and LAX in Los Angeles, with an occasional service between LAX and Las Vegas for particular high rollers. The airline would begin with a humble fleet of three Boeing 727s and three Douglas DC-8s for the trans-continental journey.

The planes would be fitted out completely in a first-class configuration, with only 33 passengers per aircraft, and five flight attendants to look after them – excessive but only the beginning for this carrier.

Passengers would be treated to leather swivel chairs and meals served on the very best china. There was a private business center with a fax machine, stand-up cappuccino bar, oversized lavatories, sleeper recliners and even staterooms that could convert into beds.

Passengers would be driven to the plane, wouldn’t have to line up nor would they have to pay any extra for luggage. Every passenger would have their own VCR player and could watch whatever they wanted in the air, and for those keen to keep working, access a telephone in their seat to talk to the ground at any time – truly cutting edge for an airline in the late 80s.

The planes would have golden interiors with curtains, and the bathrooms looked like roman bathhouses, gaudy today but back then considered the height of opulence. And passengers certainly paid for it

It would cost them $1,400 back in 1980s money to fly from Los Angeles to New York, or $1,000 to fly between Los Vegas and New York, and $180 to fly between Los Angeles and Las Vegas. There was an orange county service added near the end, but it was never very competitive. The airline claimed that it was around the same price that passengers would pay for first-class tickets on American Airlines and other carriers, but the experience of a private jet – but we will get to that sticking point in a moment.

For the airline, real luxury was finally here, and it proclaimed it with its motto: Everything else should be called second class.

Taking off into the skies in September 1987, MGM Grand Air was an apparent success in the media, with the likes of many Hollywood celebrities using it to leap across the country – giving those regular passengers flying a chance to truly rub shoulders with the west coast elite.

But in reality … what passengers? You see, it quickly became apparent that in this age of deregulation a concept like MGM Grand Air wasn’t really working as planned. Some flight even flew with more flight attendants onboard than passengers – a telling sign of the times.

In an effort to remain competitive, the airline reconfigured some of its fleet, the DC-8s, to have an incorrectly named coach-class, with an additional 40 business class seats at the rear. These seats could be had for only $600 and had many of the same perks, but the airline no longer had the same activity appeal.

Plus, it couldn’t compete with other airlines that operated first-class services with more destinations, more daily flights and frequent flyer programs. By 1994, the airline was suffering and it was costing too much money to operate. Further private jet aircraft sales finally drove the carrier bust as the Hollywood celebrities could now just charter a true private plane for all their cross-travel needs.

At the start of 1995, MGM started to look for buyers and settled on a deal only six months later, with the brand becoming the renamed Champion Air – a venture that would cater to NBA sports teams to fly them across the country.

Selling the airline “enables us to focus all our efforts on the operation and expansion of our core hotel and gaming business,”

From here, the MGM planes were traded again in 1997 to Northwest Airlines, but not incorporated, and operated vacation operations with the Boeing 727s, still only carrying around 56 business class passengers. It would run for another ten years until 2007 when the lucrative vacation contracts that approximated 75-80% of Champion Air’s revenue was given to Northwest’s mainline operations.

Champion Air was technically owned by Champion Air management, but this may have just been a ruse to prevent the champion air pilots from falling under Northwest pilot union rules – meaning they could continue to be paid less. Then the last 20% of business, the NBA contract was handled over behind closed doors, given the green light by the suspiciously all-northwest board of directors, with Northwest management themselves poaching several pilots from its sister company. Without any contracts, the charter airline faced a severe decline and was wound up.

On March 31, 2008, Champion President and CEO, Lee Steele announced that “the company will cease all flight operations as of May 31, 2008.” He cited high fuel costs and the inefficiency of their aging Boeing 727-200 fleet as some of the major reasons behind the shutdown.

“Our business model is no longer viable in a world of $110 oil, a struggling economy and rapidly changing demand for our services.”

The aircraft were returned, with a last Boeing 727 sold to Discovery channel to be crashed into the desert as part of an air crash investigation.

MGM Grand Air was a fascinating airline that only exists thanks to deregulation and the dreams of those opulent few. It was loved by celebrities and was possibly, the most American 80s thing you can ever imagine.

“It wasn’t like any other plane I’d ever flown in”, recalls actress and host of “Sandyland” on Sirius XM, Sandra Bernhard.

“That thing had more rooms than a mansion. And everybody was flying it — models and celebrities — so you’d always be running into people. There’ll never be anything like it again.”

If you enjoyed today’s content, then I suggest you check out the one about Trump, a very similar luxury carrier, which operated around the same time as MGM Grand Air. You can check it out here. You should also subscribe for more!

For those looking to support the channel, we have a fantastic pateron here that you can go check out, see videos early and vote on future topics.


It’s a shame you don’t have a donate button! I’d without a doubt donate to this outstanding blog! I suppose for now i’ll settle for bookmarking and adding your RSS feed to my Google account. I look forward to fresh updates and will talk about this site with my Facebook group. Chat soon!