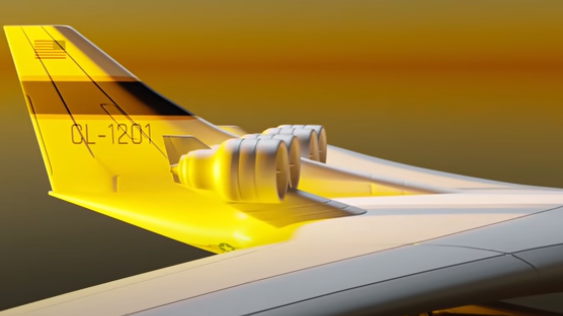 In 1969, Lockheed was tasked by the US air force to design a plane that was so big that it could carry 3000 troops, launch 22 parasite air to air jet fighters and fly for 41 days straight without landing.

But this design would never see the light of day, facing design challenges such as building a powerful enough nuclear reactor to how to even take off into the sky.

Designed by Lockheed to find the upper size limit of aircraft using conventional 1969 materials and technology – this is the CL-1201, the biggest aircraft never built.

The world of the late 60s was certainly an interesting one, right in the middle of the cold war and with an America that faced enemies across the globe. The department of Defense believed that there was a small chance that USA would become isolated from its allies, and cut off from its overseas bases.

Thus, the leaders that be needed a solution that could project an entire US army brigade slice abroad, especially to land locked areas of the world that were out of reach from the US’s many carrier groups.

Thus, the solution would be an aircraft. While the Boeing 747 that had just taken to flight was considered for the air force, Lockheed was put onto track to develop something even more gargantuan. A giant city sized flying aircraft carrier. 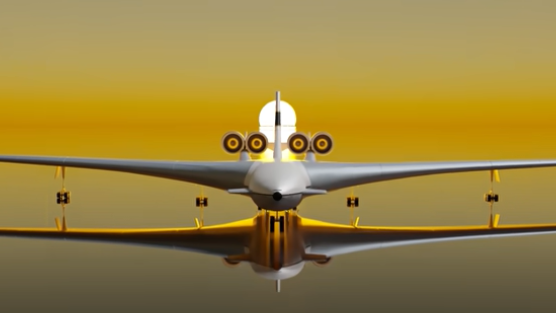 The project would be dubbed the CL-1201, based on the aerodynamic research for the previous CL-1170 – but with extensively increased dimensions.

The airframe would measure a wing span of 1120 feet, and be 560 feet long, giving the fuselage an interior space of 2 million cubic feet. A plane whose wingspan was 45 feet wider than the Chrysler building in New York is tall.

As for how much it could carry, the figure was set to around 10 million to 12 million pounds, or 5440 tonnes – a figure that was ballparked only because Lockheed couldn’t figure out why anyone would need to carry any more weight than that.

For such a huge plane, conventional fuel wouldn’t cut it – this sucker would be nuclear powered, with the reactor system giving out a combined 1.83 gigawatts – allowing this plane to fly 41 days straight at Mach 0.8 over 16,000 feet, only having to land because the crew would run out of food and water. The crew of 475  (which may go up to 800 during an active combat zone), would be needed to maintain operations for 24/7. The reactor itself wouldn’t need to be refueled for over 1000 operation hours. 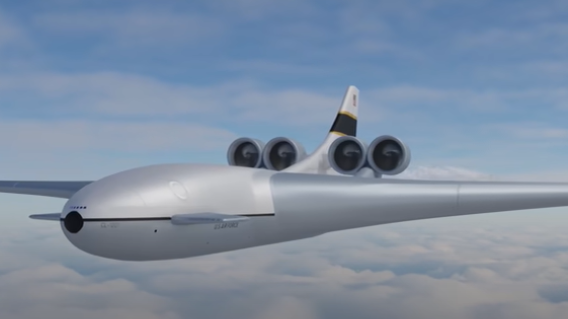 Because of this, the plane wouldn’t have any range limitations, and could fly anywhere in the world – well apart from where it could possibly land.

The first version, the CL-1201-1-1 was dubbed the Attack Aircraft Carrier. It would carry eleven fighter bombers under each wing, and two more in the fuselage hangers, for a total of 24 aircraft. While we don’t know what these final mini-jets would have been, in the documents, they are listed as the F-4 Phantoms.

The idea was that this plane would serve as the spearhead at the start of an invasion or military power projection, and be the command center for any military operation. The plane would also carry ten long range attack missiles, with Lockheed not ruling out that their warheads would be nuclear tipped. This plane would never land in enemy territory, simply circling the battlefield at 30,000 feet and around 600 miles away. 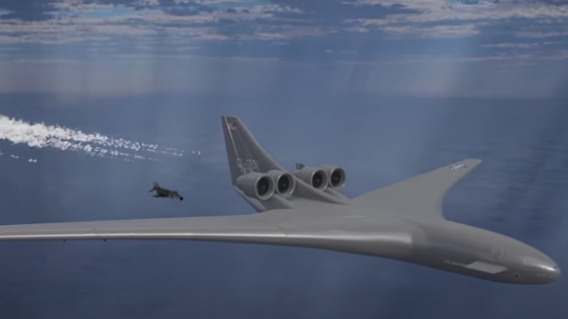 As for going deep behind enemy lines, that was up to the CL-1201-1-3, or dubbed, the Logistic Support Aircraft or LSA.

This version of the plane would be the carrier for the bulk of the mission, bringing drop troops and other equipment. It would carry 400 troops and 1150 tonnes of cargo. But you might be wondering, how did the LSA deploy these troops? Well, that’s the job of the equally ridiculous medium intratheater transport planes, converted Boeing 707s that would fly troops and materials back and forth from the LSA. The LSA would have a fleet of five 707 MITs that would physically dock three at a time to the LSA whilst in flight. The planes would approach from the rear and connect to the back of the plane – power down engines and open the nose through a special airlock. These planes would then fly troops and gear to drop zones for paratrooper operations, or land at friendly or captured airports.

In addition to the 400 troops on the LSA, there would be 150 troops on each MIT, to a combined total of 1150 troops in the entire mini-fleet.

But these aircraft wouldn’t actually operate on their own. It would be a fleet group of a single attack aircraft carrier, and seven, yes that’s right seven, logistic support aircraft. Because the fleet would be flying for 41 days straight, each plane had 6 decks for crew sleeping, recreation, mess hall, strategic command and more – not including the vast cargo bay – 22 times bigger than the Antonov-225. During deployment and flight, any operations to move equipment around would need to be coordinated to prevent the center of gravity shifting too much.

In total, the combined fleet would carry 3896 ground troops, 6207 tonnes of equipment, 30 days food and water, artillery, light aircraft and attack helicopters. Enough for a complete invasion of almost any country in the world.

While such an awesome projection of power would be invaluable for a surrounded United States, there were several major flaws with the design. 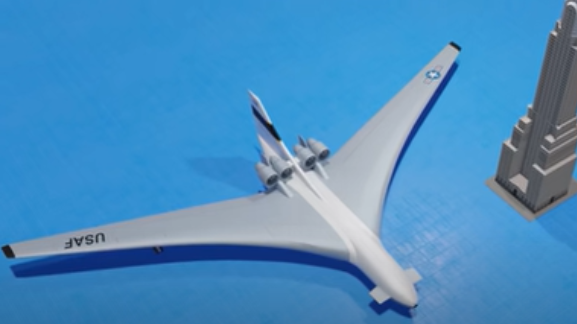 First of all, we have to address the elephant in the room. How on earth would this gigantic aircraft take to the skies? After all, with a wingspan so wide and 8-feet wide wheels approximately 200 meters along the wing, the runway itself would need to be easily 650 feet. No such runway exists, and several would need to be built for the extra capability for worldwide operations. But designers thought of this and came up with honestly, a pretty genius solution.

The aircraft wouldn’t take off from a runway at all. It would fly vertically like a harrier jet. The LSA would use 54 recently developed turbojet engines from the Boeing 747 to provide over 82,000 pounds of thrust. The aircraft attack version would need a staggering 182 jets to provide vertical lift. Each engine would be in clusters of 20 throughout the plane. 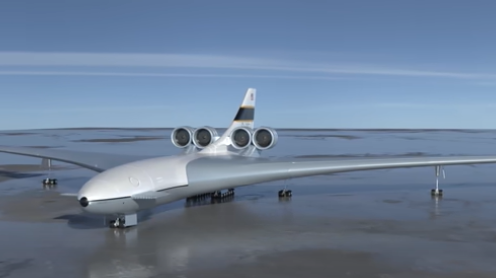 But you might be asking why? If this plane was designed to fly from continental United States to take on enemies abroad and never land, why give it the ability to land vertically at all?

Above 16,000 feet, the four massive turbojet engines, each with the diameter of a Boeing 747, would powerup with the tips going supersonic – If they rotated at 2000 rpm, the tips would be moving at over 4,000 feet/sec. Such engine technology is almost beyond today’s technology, and would have been an impressive feat for the designers back in 1969.

To power all of these engines, the CL-1201 would have a nuclear fission reactor that would provide 1.83 gigawatts for all operations onboard, although it would have a small fuel compliment as a backup and to ensure that the VTOL capacity worked when needed. To keep the crew safe from radiation during flight, the 30-feet wide reactor core would have 20-feet of radiation protection adding to the enormous weight. To keep it cool, liquid metal would transport the heat to the exterior or the plane touching the supercool air outside.

To prevent radioactive material spilling out during a crash, the reactor was designed to be shut down within 20 seconds and and could survive a head on impact with a mountain travelling at 600 miles an hour without breaking apart.

Speaking of impact, the designers also realised that it would be susceptible to missile attacks – thus, the solution was laser cannons and point defense systems to blow them out of the sky in flight. But as we don’t have many lasers in use today you can see how that idea would have gone.

In the end, the CL-1201 project didn’t get any further thanks to its cost, and what could have been has now faded into history. 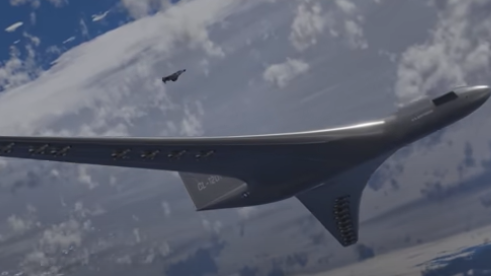 But maybe … and this is the crazy part … maybe it was built. That’s right, time to pull out the tin foil and believe in something so crazy sounding that maybe there is a nugget of truth.

In March of 1997, there was a series of widely sighted UFO objects across Arizona, Nevada and Mexico dubbed the Phoenix Lights. witnesses described the object as a giant flying V that was bigger than a 747 and sounded like the gushing wind. Despite being nighttime, witnesses saw several lights like those found on aircraft, and the object was huge it visibly hid the stars in the sky.

UFO experts suggested that this object would have been at least a mile wide and fits the description of the CL-1201 pretty well. After all, they never did reveal what the 2nd version of the CL-1201 was designed for.

Years later in 1997 a Phoenix city councilwoman launched an investigation into the event, said that of the over 700 witnesses she interviewed about the lights said that “The government never interviewed – even one”.

Thanks so much for reading and watching today’s content. We have gone in a bit of a different direction but I think it’s something that fits the bill for an incredible never built aircraft. This video topic was actually suggested by one our subscribers in the patreons in our special chat, so if you are interested in choosing what comes next on the channel, then I suggest you head on over here.

If you enjoyed today’s content, then consider subscribing to our YouTube channel. It’s free and you can cancel at any time!