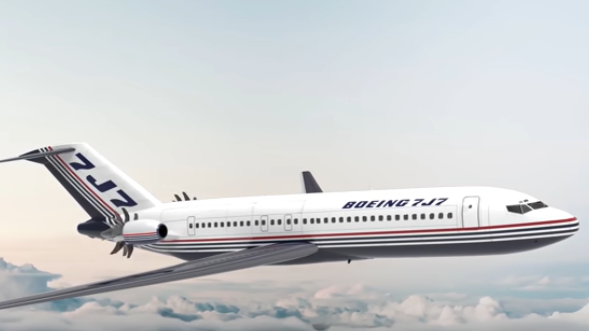 Did you know Boeing almost pulled the trigger on an unducted fan airliner back in 1992? It would be the successor to the Boeing 727 and replace the Boeing 737, changing short haul flying forever. Today, it may even be the template for Boeing’s next aircraft the 797 – Let’s explore … the never built Boeing 7J7.

The 1980s was an exciting time in aviation. Airbus had entered the scene and rivalry between aerospace builders was entering a fever pitch! On a cool morning in March 1984, Airbus smugly revealed to the world the Boeing 737 killer – the Airbus A320.

Boeing needed something to trump its rival, and the very next year, it entered the Paris Air Show with an elaborate mock-up of an incredible machine that would be enter the market only seven years later, the Boeing 7J7.

The Boeing 7J7 was designed for a 150-seater market already flying thousands of older Boeing 737s, some of which were approaching twenty years old. It also needed to replace the 727 and McDonnell Douglas’ DC-9s, focusing on domestic routes and Pan-European travel around 2,000 nautical miles. Boeing had previously tried to replace the 727 with the Boeing 757, but sales were poor and it turns out, airlines wanted frequency over a bigger narrow body. Essentially, it was better for customers to have more options of flight times than for the airline to save on airframes.

Boeing needed the new aircraft to fill a gap between the Boeing 737 and the Boeing 757, and it had to do it in a time of competition and high jet fuel prices.

This is why the plane was powered by an incredibly unique engine – the prop-fan. By having the fans on the outside of the jet engine, Boeing promised jet-like speeds but for a fraction of the fuel cost – a difference of 60% to the nearest other jet flying back that day!

The engine had propellers with two rows of blades spinning in opposite directions to reduce losses due to “swirl”—energy wasted in imparting spin to the air behind the airplane. Both would be installed on the airplane’s tail, not under the wings, to allow room for the propeller disc and to keep noise out of the cabin.

This plane would also feature fly by wire controls, a glass computerized cockpit, like the L-1011, and high strength carbon fiber throughout.

In its first public design iteration, passengers onboard would have been treated to a twin-aisle cabin of 2-2-2, with no passenger more than one seat from an aisle. The twin aisle design would cut boarding time by 10 minutes over single aisle and make the aircraft perfect for commuter routes between major cities of a range of 2,700 nautical miles (5,000 km). Boeing would also propose a high-weight version that had extra fuel and could fly 4,250 nautical miles (7,870 km).

To share the financial risks of this $4 billion dollar project, Boeing has enlisted corporate partners from three countries. The Japanese [hence the “J”] had the biggest share of the program – 25 percent – through a new consortium of big manufacturing firms called the Japanese Aircraft Development Corp. Two established aircraft makers, Saab of Sweden and Britain’s Short Bros., had smaller stakes. Boeing has guaranteed that it would maintain at least a 51% share of the project.

Each Boeing 7J7 would have a list price of around $28 million, which today is $67 million.

Pitching the design to the market came with mixed reactions. SAS wanted a denser version of the plane with a 2-3-2 seating configuration for economy travelers and was contemplating becoming the launch customer. However, other customers were skeptical as the engine technology was unproven at the time.

The first problem was that the design was constantly changing.

This is where it starts to get confusing. In 1986, Boeing proposed a smaller version of the 7J7, seating 115 passengers called the 7J7-110, but then retracting it and switching the small concept to its Boeing 737 line. At one point during this year, customers could also choose between a propfan and a jet engine, but then Boeing canceled the jet option, recommitting to the propfan. Only to have the propfan manufacture reveal delays, the very next day, missing the launch date.

By June 1st, 1987, Boeing was approaching its deadline to either make the plane or get out.

So far, there were only three major airlines interested.

It’s this stretched version that really threw a spanner into the works. The engine was already at its limit for this aircraft, and Boeing was concerned that they would paint themselves into a corner if an airline asked for an even bigger version of 200 seats.

“Until we hammer it down to one size, the 7J7 won’t go”, said Dean Thornton, president of Boeing Commercial Airplane Co. In an interview, he said the most confusing part of the decision-making process is trying to pinpoint the airplane’s starting size.

Without knowing where to start, Boeing was not going to go. By December 1987, Boeing paused the production of the aircraft indefinitely.

There are also some other concerns about the aircraft. For one, airlines were skeptical that these planes were as quiet as other jet aircraft, with the fans being exposed out in the open.

The plane only flew at Mach 0.84, which is faster than a turbo prop, but slower than most jet aircraft today. Those ten minutes saved at the airport would have been lost in flight.

And there is also the curious case of Boeing sales agent in Germany, Rudy Hillinga, who in the 80s was in talks with Lufthansa. Allegedly, she threw the 7J7 under the bus in favor for an order of 737s, not believing in the type, and convincing Lufthansa otherwise, making Boeing miss out on a huge order, which could be considered an inside job – potentially.

Lastly, the Boeing 7J7 was made for an era of fuel uncertainty. By the late 80s, fuel had dramatically fallen, and the Western world had secured a new oil supply. With fuel now cheap again, the 7J7 didn’t really have much of a purpose and was never built. 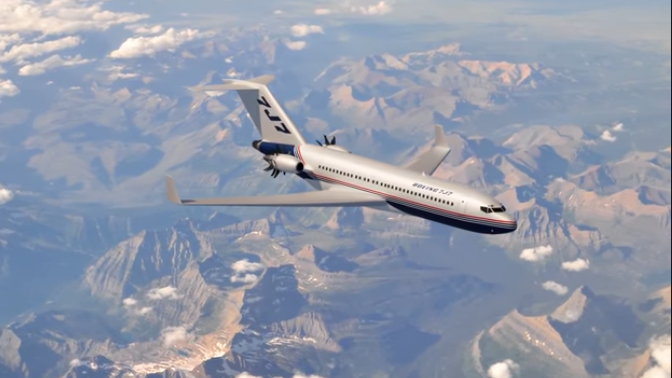 Today, we can very much see that the Boeing 7J7 was a precursor to Boeing’s next needed aircraft. A twin-aisle, 5,000 range, 200 -seater aircraft dubbed the Boeing 797. Had the Boeing 7J7 been built back in the 80s, it is likely that today, we would see a very different market indeed, although one was perhaps even the Boeing 737 wouldn’t be as successful.

Thank you so much for stopping by today! I hope you enjoyed the very strange tale of the Boeing 7J7 and I can’t wait to see your thoughts in the comments!