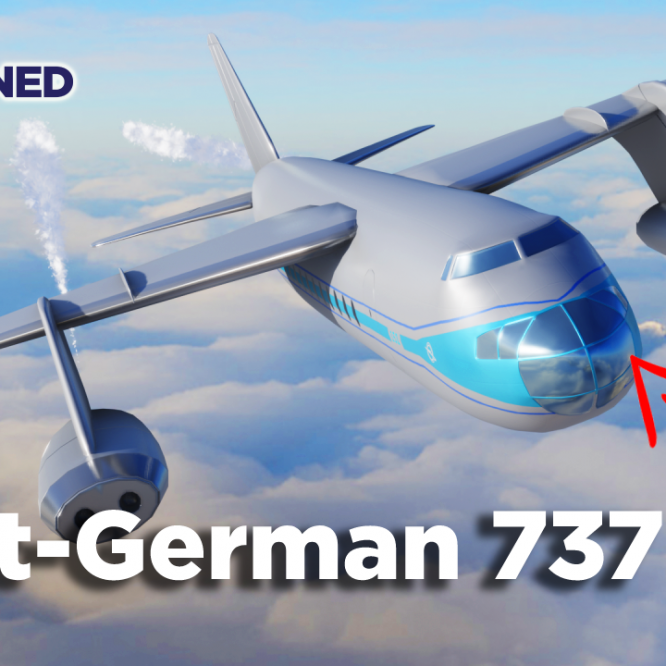 In 1958, East Germany shocked the world with the rollout of its jet-powered aircraft – seeming this new nation had in only a decade accomplished what took decades elsewhere and brought the jet revolution to the soviet union before even Moscow.

But politics would be its undoing and East Germanies first and only jet passenger aircraft would never see passenger service, despite being in full production. What was the Baade 152? What would it be like to fly? And why was it never built? Let’s jump in

Converting a military bomber aircraft to a passenger jet plane was not a new idea, and it was the start of what would become the Baade 152. Its design could seat up to 57 passengers, or 72 in a high configuration and It would be used throughout the soviet union, and even be marketed to the west using American-made avionics! If it went ahead, it would have been a political triumph of the USSR, and cement the east german aviation industry for decades to come.

But it never happened. And to understand, we need to go back to the beginning.

Building a new jet aircraft in 1952

The 1950s was a very different place in Europe. Germany was occupied by the two sides of the cold war, with the west controlling the west side of the country and east Germany under the USSR’s controlling influence.

As part of its ‘stewardship’ of the country, the USSR had eliminated the homegrown aviation industry after the war and deported all the aerospace engineers to work on military projects in Moscow. The country was left without any involvement in aviation and lacked a competitive edge on the world stage.

But these engineers had not been idle. While working in the USSR, they noticed that the soviet bomber project, OKB-1 150 could very well be used for a commercial passenger aircraft. By the early 50s, East Germany had been officially founded, and the East German aerospace scientists were allowed to return home – many of which couldn’t shake the idea of the jet bomber turned civil aircraft.

At the same time, the new state declared that it needed a new aerospace company called the VEB Flugzeugwerke based in the city of Dresden. It was initially set to build military aircraft, but thanks to a popular uprising in the USSR the next year, the powers deemed that it would be a civil production facility.

To jump-start product development, the firm hired newly returned engineers like Brunolf Baade, among others. As the whole team had worked on the Soviet bomber, and still very well had the idea to turn it into a civil jet plane, the firm decided to commit to the idea – dubbing it the Baade 152 after the lead engineer.

The production facility would be set up to produce the 18 airframes within the decade, and jumpstart the east german aviation industry – essentially leapfrogging over their proposed rivals in the western state.

As mentioned before, the Baade 152 was configured with 57 seats in a one cabin configuration, of around 34 inches of legroom, although during to proposal stage several other alternative seating arrangements were created, such as a 72-passenger configuration or a more spacious 42-seater for leisure routes. Likely the firm also considered a VIP transport option for around 10 passengers.

The firm went with the Pirna 014 turbojet from Berlin to power the plane in dueling configuration under each wing.

The plane would have up six crew members to fly it, including three cabin crew and three on the cockpit.

In terms of routes, the design team was promised that it would fly throughout the soviet union as a small shuttle aircraft to link nearby cities, owing to its small range, much like the role proposed by the French-built Sud Aviation Caravelle.

Local airline Lufthansa jumped at the chance to buy the home state aircraft with an order for 20 planes.

Production of the first prototype was slow, as facilities in East Germany were lacking compared to the western counterparts, and several avionics were unavailable in the USSR that was needed for modern jet aircraft. Because of this, the firm reached out to several western and American aerospace firms for components and suggested that if some sales could be garnered from western airlines, then production could become a joint venture.

By 1958, the first prototype rolled out of the workshop, on a very unique looking tandem landing gear and glazed nose for the navigator to look out – common among soviet era strategic bombers but not seen before on a passenger jet aircraft. The maiden flight was a success and it looked as if the east german state had freed itself from the shackles of being behind the west.

Unfortunately, only a few months later that dream would end forever.

On the 4th of March 1959, the prototype crashed during its 2nd test flight and killed all onboard. Being a political embarrassment, the crash was never fully investigated and hidden until well after the change in government in 1990. It has since been believed that the aircraft had a fatal flaw with the design. When in a steep descent such as coming in to land on a short runway, the fuel tanks got cut off and the engines stalled – leading to a crash. Additionally, it is believed that a lack of experience with stalling jet engines led the test pilots to underestimate recover times and be unable to recover before the crash.

Following the accident, the firm switched to the second prototype to test the berlin produced Prina 014 jet engines. This design would do away with the glazed nose and strange landing gear, bringing it in line with other jet aircraft used at the time.

A third prototype was designed, but it never made it to flight testing and was only used for cabin and control surface tests.

After three flight tests, the entire program was grounded. The fatal flaw that had led to the first crash had seemed insolvable without a total redesign and scrapping the 20 aircraft in production for Lufthansa. But this wasn’t the reported reason for the cancelation of the program – rather – it was political.

The soviet union in Moscow, who had initially promised that the Baade would fly throughout the USSR, actually stepped in and commanded the east german state to dissolve the entire aerospace industry – shut down all production and scrap the design – including the two prototypes. This was because the USSR was working on its own airframe to compete in the same market, the Tupolev Tu-124. As such, they dropped any pretense of supporting the program, cut off funding, and refused to follow through with any orders.

And with a plane that couldn’t fly, a production that had no orders or funding, and a market that was quickly evolving with the arrival of the Boeing 707 – it looks like the iron curtain would close on the Baade 152 for the final time.

Looking back at this time, we can see that the development team was ahead of their time. The Baade 152 was based on designs from the war, a scrapped bomber from the USSR, and a dream from east german aerospace engineers who wanted to change the way their country was seen on the world stage.

Had the program been successful, we would have likely seen the equivalent of a third player on the market against Boeing and Airbus. This is because the firm was sheltered away from the west in the USSR, and with state support, would have been able to tap almost an exclusive market – and as it wasn’t state-controlled, rather in East Germany, it would have been able to find its own way after the fall of the berlin wall.

But that’s an alternative history that we will never see.

Ironically, the Baade 152 firm would go on to become an Airbus facility for the Airbus A310 in 1990 and evolve to become a world-renowned facility converting Airbus aircraft into freighters and becoming one of the only MRO maintenance providers that can overhaul an entire Airbus A380 in the world. A happy ending although in a round-about way.

What do you think? Is the Baade 152 a good concept? Let us know in the comments!


Thanks for the update, is there any way I can get an email sent to me whenever you write a fresh article?


Thanks for the sensible critique. Me and my neighbor were just preparing to do a little research about this. We got a grab a book from our area library but I think I learned more from this post. I’m very glad to see such magnificent information being shared freely out there. 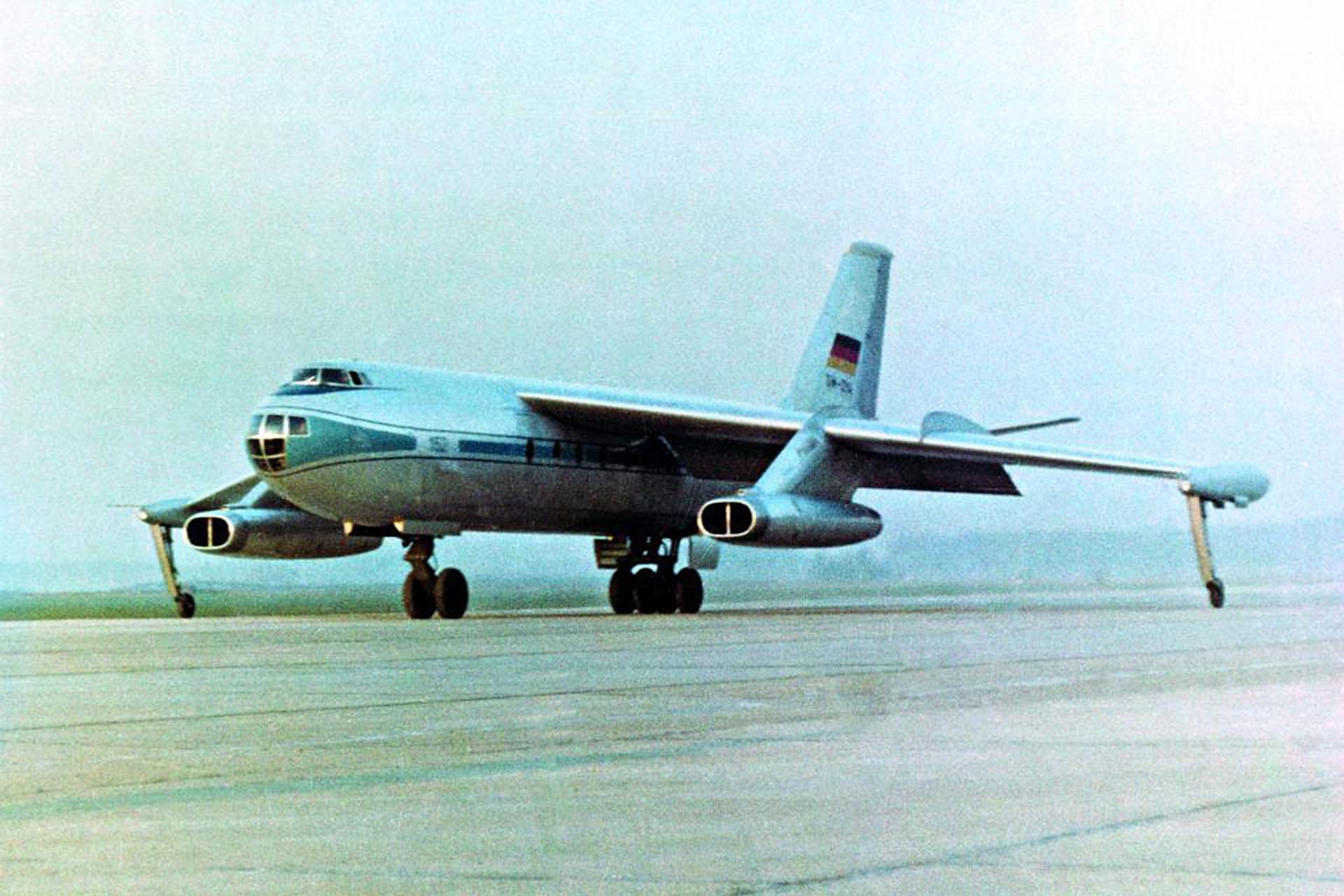