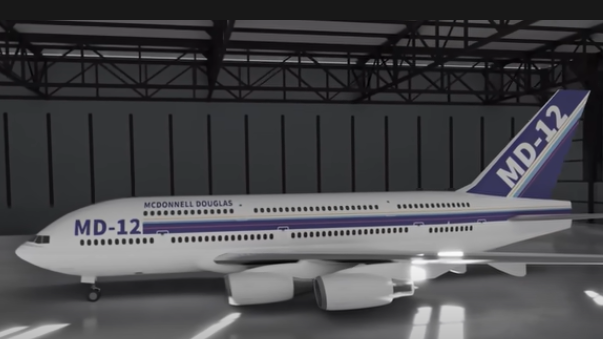 The McDonnell Douglas MD-12 was the first attempt at replicating the Boeing Jumbo Jets 747 success. However, the goal was a little out of reach for the company, and it never went ahead. Why was it designed? What would it be like to fly? And what happened? Let’s explore this never built aircraft.

In the late 80s, McDonnell Douglas was looking towards its next aircraft. It had been riding the coattails of its DC-10 program for decades and had recently launched the new MD-11, which failed to capture the sales MD needed and had several design flaws – it didn’t live up to the range expectations nor the fuel burn nor passenger capacity.

McDonnell Douglas needed a new aircraft design, something bold to fix the problem of congested airports, bigger than a MD-11 and made for continent-to-continent routes. The Boeing 747 had enjoyed that market for long enough, and it was time that McDonnell Douglas brought its own concept to the market.

Called the MD-12X, the concept was originally proposed as a natural extension to the MD-11. It would still be a Trijet, but would be much larger and fix the flaws of the earlier design.

You might recall in another video, we discussed Airbus’ attempt to partner with McDonnell Douglas for a trijet aircraft for its A340 series. While that never happened, it seemed that the Airbus influence rubbed off on McDonnell Douglas.

It began with the engineers. Splitting the cockpit above the passenger level on the MD-11 design allowed for a cargo door for future freighter versions and allowing panoramic views for a first-class cabin, a cockpit design much like the Boeing 747. From there, the length of the cabin would extend to the tail and become a true double decker aircraft.

It would have a range of 8020 nautical miles, although the high-capacity layout version was only rated for 7,170 nautical miles (9,200 mi, 14,825 km), which shows that even with four engines, the design didn’t have a lot of power and still made compromises. McDonnell Douglas envisioned that this aircraft would be used for transatlantic travel between London and North America, as well as ply a trade in South East Asia with its high populations. The high-capacity version would have likely have been directed at the Japanese domestic market – one that had been successful for Boeing and its 747 series.

McDonnell Douglas would also propose two other versions of the aircraft, a freighter for cargo operators (a regular customer of the MD-11) with a range of 4,360 nautical miles, and a combi-version that would have allowed airlines to swap out the seats for cargo between flights where needed. This would have been targeted to airlines like KLM who operated Combi 747s to the Caribbean among other destinations.

The concept was launched in 1992 with much fanfare and with a heavy marketing campaign, with plans for the first flight of the MD-12 to take place in late 1995, with delivery in 1997.

However, despite all the press, no airline actually came through with a solid order. What happened?

There was a burning question: how would this aircraft be paid for? McDonnell Douglas and Taiwan Aerospace Corporation signed a Memorandum of Understanding to form a company to produce the new design. The new company would have McDonnell Douglas as the majority shareholder (51%) with Taiwan Aerospace (40%) and other Asian companies (9%) having the remaining shares. This was done in hope and anticipation that Asian carriers would order the new aircraft.

However, this partnership fell apart and by 1993, McDonnell Douglas decided to go in a different direction, citing too high costs for the development of the aircraft. While at the time it had estimated to cost $4 billion to produce, we know now from the A380 development that the true price point would be aggressively higher.

In 1996 the airframe maker came to the market with a simple tweak of the MD-11. Instead of the MD-12, they would present MD-11LR, a long-range version of the MD-11 – pushing its range up to 8320 nautical miles. (+2000 increase). This new plane would also have a huge new 213 feet wing. Trading the range for passenger capacity would the MD-11 stretch. It would have the same wing as the LR, but be 31 feet longer than the original MD-11. This stretch would carry 375 seats in three classes.

In addition, a twin-engine design was also considered to rival the A330 and Boeing 777, but never really made it further than internal rumors. In my personal opinion, this would have been the right direction forward for the firm but hindsight is 20/20.

A lack of sales of the MD-11 stretch pushed the company to the breaking point and the firm ultimately chose to shut down development. By the end of that same year in 1996, the company would be approached by their rival Boeing with a buyout offer.

Now… I don’t mean to start a conspiracy theory or sell out tinfoil in your local area, but during the research of this article we came across a rumor that McDonnell Douglas started the MD-12 and MD-11 stretch programs in an effort to drive up its share price before a Boeing take over. Now, none of these rumors can be substantiated but the timing of the 1996 MD-11 stretch and the Boeing take over was very close.

The fact that Boeing ended up paying $62.89 per share — a huge premium to McDonnell’s closing price of $52 per share, certainly leads to some interesting fireplace discussion. Leave a comment down below if you think so!

As for the MD-12 program, well was the chapter closed or not? Instead of a clichéd storybook ending, did the project truly die when Boeing took over the firm?

Boeing for some time has had a project in its books called the New Large Airplane. In 1993, Boeing was about to bring to the market a true double decker Boeing 747 design, one with a cabin that ran the whole way through the aircraft.

Seemingly seeing the failure of McDonnell Douglas with the MD-12 only a year earlier, Boeing decided to scrap the NLA and instead work on a resigned of the 747 that would become the Boeing 747-8.

As for the next Boeing New Large Airplane, they would roll the project’s specifications into the new Boeing 777X series – which has already taken flight and will be flying for airlines come later.

Looking back on the project today we can see that the MD-12 was ahead of its time. It was the Airbus A380 ten years before and may have dramatically changed the landscape had it been built. Why airlines at the time chose not to invest in McDonnell Douglas’s vision is unknown, but we can summarize that failed promises of the MD-11 and a rising fuel price had made them question the need for such a large aircraft. It would take another decade of rising airport congestion that would make the product more viable.

Simply put, the MD-12 was too early to the market – a market that is questionable even needed the aircraft type.

Thanks so much for reading, it was great to dive into a forgotten part of history and see where things could have gone differently had McDonnell Douglas gone through with this design. If you want to support the channel more than just watching and reading, we have a Pateron page that has videos early where possible, exclusive live streams, tutorials and a chat section for fans – do check it out. Otherwise, then subscribe to the channel to stay tuned for more contents just like this one.


Fascinating blog! Is your theme custom made or did you download it from somewhere? A design like yours with a few simple adjustements would really make my blog stand out. Please let me know where you got your theme. Appreciate it


Youre so cool! I dont suppose Ive read something like this before. So good to find someone with some authentic thoughts on this subject. realy thanks for beginning this up. this web site is something that’s wanted on the web, someone with a bit originality. helpful job for bringing something new to the internet!