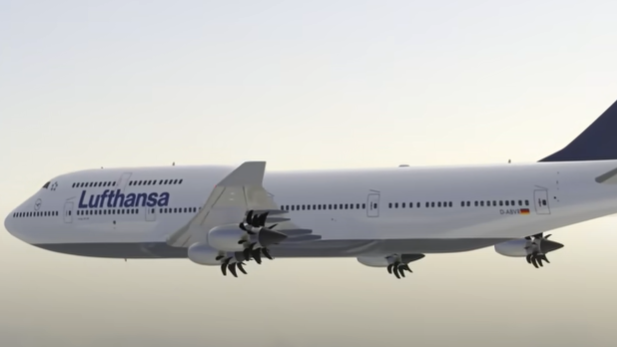 In one of my most recent videos, I talked all about the Boeing 747X program … but there was one plane in the series I didn’t mention. An incredible never built Boeing 747-500 with propfan engines. It would have an impressive range to go from London to Sydney non-stop and be ultra-fuel-efficient. However, despite all of these advantages, Boeing never followed through with the concept.

This mini-episode of never-built highlights a design that didn’t quite fit in with the others of my 747X videos, but I wanted to highlight it all the same.

You see, the Boeing 747-500 was a design that was going to take advantage of the engine of the future – the propfan. It was a new take on the jet engine that could counter rotate in props behind the engine and would bring with it a host of advantages – but this story actually starts with another plane – the Boeing 727.

At the time, Boeing was also redesigning its successful 727 series with the new propfan engine in mind.

The plane was called the Boeing 7J7 and it would have been incredible for the world burned by the fuel crisis. It would have a long-range and unmatched fuel efficiency, especially against rival plane design.

I’ve actually done an entire video on the Boeing 7J7 program that you can check out here, needless to say the concept was simultaneous cutting edge, and also a backward step for aviation.

Like the 7J7 program, Boeing needed a successor to the Boeing 747-400, its best-selling version of the jumbo jet yet.

While it had also been working on new large aircraft, N650 and others including a strange partnership with Airbus, it was also flirting with the idea of taking the propfan engines and slapping it on the Boeing 747. After all, why not scale up the technology and call it a day, in a new engine option way?

Essentially, making a double-decker 747 jet with propeller engines in the early 90s.

This 747-500 model would have a range of 8,700 nautical miles or around 16,000 km. This range would have made it perfect for routes such as London – Sydney, New York – Sydney, New York – Singapore, and Los Angeles – Singapore. It would have been the 777-8X of its time and could have possibly been bought by airlines such as Qantas and Singapore. By comparison, the 747-400 could only travel 7,670 nautical miles or 14,200 km. Boeing felt that the program was very doable, cheap to build, and will result in approximately 10% reduced cost on a seat-mile basis compared to the original 747-400.

The plane would also have a new wing-like the Boeing 777, and a stretched upper deck to accommodate 500 passengers and all their luggage.

Boeing planned to introduce this aircraft by the 1990s, and would bring the world ever more connected with new routes and impressive aircraft performance. Boeing was targeting British Airways, Cathay Pacific, Japan Airlines, Qantas, Lufthansa, All Nippon Airways and Singapore International Airlines, as a launch customer.

Let’s start with the engines. the engines were loud, and despite efforts by general electric and others, airports and airlines were not convinced that they would be able to make it quieter than a jet engine. Plus, a new engine type would insert lots of unknowns into the design and development of the aircraft – such as maintenance issues, spare parts and more. Ultimately, GE and other designers of the engine type decided to not go ahead with the production of the engine, and this was a major reason why the aircraft never went ahead.

Boeing would then re-evaluate the design to include one with other engines, the normal turbojets, but there were some other issues.

This plane was created in mind for long haul routes, for operators like Qantas and Singapore. But these two carriers don’t make a market for a new long-haul type – they would only at max order 10-20 each, leaving Boeing holding a massive development bill. Boeing had tried to enter this market before with the Boeing 747SP, a long-range version of the 747-100. They only sold 45 of them, to carriers like Iran Air and Pan Am – which by this time, were not in the market for any new jumbo jet aircraft. In fact, no one needed the 747-500, the market was saturated by hundreds of 747-400s, and there were plenty of twin-jet designs like the 767 and A300 slowly encroaching on the market.

In 1985, the ETOPS rules were relaxed, allowing twin-jet aircraft to fly over oceans. Airlines could now fly smaller equipment (767 or A300/A310) and sell all the seats or fly two daily round trips – they would have struggled to sell the same on the 747-500. With ETOPS expanded yet again in 1988, the need for a high-capacity quad jet to fly a long-range simply vanished. Airlines could still use it to fly Australia to South America – but this market was limited indeed.

With no market for the type, and no engine, Boeing decided to pass on the -easy-to-make-and-sell, 747-500, and instead proceed to build the later 747X design. Which, as I mentioned, you can watch on the channel.

Thanks so much for watching today’s quick and mini video. I’ve had a lot of new people subscribe to the channel and come to check out what else we have going on, a big welcome to you. If you have any questions for a video of the future, let me know in the comments – I read every one and would be thrilled to see your ideas.

If you want to support the channel, we have a fantastic patreon here where you can see videos early, and chat with other fans. Check it out to see what other rewards we have, and feel smug that you’re helping a little channel grow.

Also, a small channel update, now that I have successfully moved out of the countryside, I’ll have better access to the internet and be able to do livestreams. What an aviation channel will do as livestreams I don’t know, but again, let me know in the comments!

Thanks so much for watching!